After first avoiding all news relating to the sensationalist and provocative headline, ‘British Pakistani men are raping and exploiting white girls’ I’ve decided to throw my hat into the fray over Sarah Champion, Labour’s shadow secretary for Women and Equalities (which women? which equality?) writing a piece for The Sun (who does that?) in light of the conviction of one woman and 17 men found guilty of involvement in a sex grooming network in Newcastle. 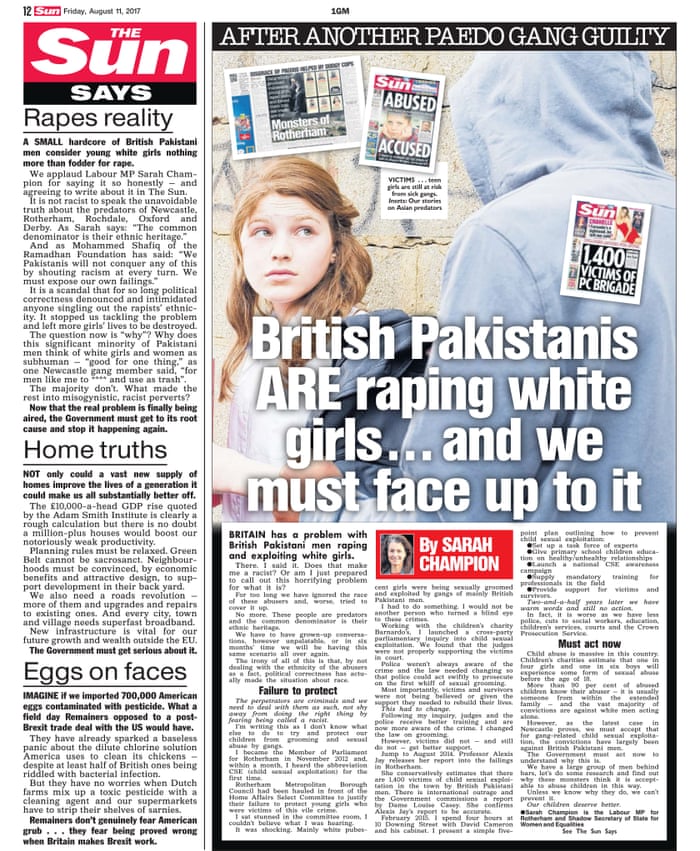 I initially avoided the topic because whilst outrageous, I was unsurprised. A progressive leftist representative for ‘women and equalities’ espousing very basic racial stereotypes is a common bastion of mainstream feminism which has long prioritised the aspirations of middle-class white women whilst avoiding deconstruction of their own racial and class privileges. Moreover, the spectre of the non-white male migrant who comes to Britain and muddies its whiteness through rape and violence is a familiar historical trope. This is very much bound up with fears about the pollution of the ‘whiteness’ of Britain, as much as such fears appallingly detract from the violence the victims of this case faced. It is also unsurprising because the inhumane stereotype of the misogynistic brown Muslim man who is both sexually repressed and sexually excessive is familiar to us. He is homophobic, misogynstic and now also a rapist and pedophile – all so that we are not. His homophobia, misogyny, rape and pedophilia make us Liberal, make us Tolerant and make us Great Britain.

However, I feel I have to say my piece because despite Sarah Champion’s resignation and Naz Shah’s spot on response that ‘there is no community where men don’t rape girls and we must face up to it’; to me this headline, this “scandal” and the groups and institutions of people which made it possible, require closer inspection and response than simply stating ‘that’s racist, white men rape too’. Of course they do. In fact, we know from famous cases like Jimmy Saville’s and Rolf Harris’ that men who are rich, white and famous are also child abusers; we know from the multitude of cases year upon year that young, athletic, even attractive white men rape – and are rarely convicted.

The point must be more than ‘white men rape too’; we have to highlight the way this telling of this story – not only in The Sun, whether Champion’s words were twisted or not the fact is this same message was said across the news media and press – works to completely throw victims of sexual abuse under the bus.

In the first place, the sentence, ‘British Pakistani men are raping white girls’ and the explicit correlation made between rape, child abuse and ‘Asian men’ has the effect of making rape and child abuse seem something that is inherent and natural to Pakistani/Asian men. In fact, rape and sexual exploitation are explained by the fact of men’s racial background, which means that rape is suddenly made into something which is utterly incomprehensible to non-brown people. The implication is that rape is inherent to brown men, and therefore white Britain cannot fathom it. By doing this, a multitude of violence is enacted and a lazy racist stereotype played. This allows us to repeat the ambiguous phrases that enable the state to more closely survey and criminalise Muslims – such as ‘there must be integration’ and ‘there is a need for British values’.

More importantly, in essentialising rape to brown men the problem of rape and abuse itself is displaced and the culpability of anyone else, any institution, social problem, or social context is made impossible. For example, the vulnerability of young girls in the first place gets to be brushed aside. Whilst seemingly a concern for ‘white girls’ we have to realise that such a headline actually works to make sure nothing has to be done to eliminate the vulnerable positions young people find themselves in, nothing has to be done to create social safety and security for them. Instead, brown men become the focus of the case and racism is prioritised over child protection.

Moreover, by pretending rape is solely the cause of brown men every victim and survivor of sexual abuse at the hands of anyone that is not a brown man is completely disrespected. The implication is that rape and sexual abuse perpetrated by those who are not ‘Asian men’ is anomalous, because rape and sexual abuse are simply not “done” by other people. Indeed, the idea that ‘the common denominator [of these abusers] is their ethnic heritage’ [x] allows us to turn a blind eye to the common denominator of living in Britain and therefore deep social problems including misogyny and poverty in Britain, the failure of the justice systems and child security services in Britain; of the common denominator of masculinity and therefore the culpability of patriarchy and the socialisation of men into violent ideals which include entitlement to women’s bodies. It further ignores the suffocating culture of victim-blaming and lack of consent that enables and ensures rape and sexual exploitation happen on mass scales. The focus on white girls as victims of such abuse is relevant due to the case at hand but unfortunately replicates the way certain victims of sexual abuse will always gain more sympathy and outrage than others who perhaps aren’t girls, and/or perhaps aren’t white. In fact, the sexual exploitation of Asian men which is already so taboo a topic is made even more impossible to raise since Asian men are deemed solely perpetrators of rape, never victims to it.

The main point here is that rape, child abuse and sexual exploitation are problems that the behaviours of many people and the repeated actions of many institutions (schools, the justice system, the law etc) enable. This includes white people. This includes arms of the British state, and this includes the social fabric of Britain. To pretend that rape and sexual abuse are beyond the comprehension of white Britons violently silences and painfully disrespects other survivors of sexual abuse and exploitation more widely in our society.

Moreover, the fact that such abuse cases have apparently gone unreported due to people being afraid to be called racist frankly says more about the ego of those concerned than any particular race. True concern for victims of sexual violence entails belief in them, creating space for them, speaking up for them and changing society in light of the violences enacted upon them.