The 8 pm train from London Kings Cross to Leeds is pretty quiet. I see a few exhausted people like myself, who I presume – from the bedraggled placards they still clutch – have also spent the day protesting Donald Trump’s visit to the UK. I sit down heavily and sink lower into my seat when I notice two men with ‘Make America Great Again’ t-shirts sitting on the table a few seats away. I’m too tired to be shocked and in no state to write a full journal entry, so I open my diary to make one simple note: ‘everyone “loves” a Muslim on a march, but who loves us on the train home?’

250,000 people protested Trump in London last week. I hadn’t specifically intended to participate but part of me felt it was a good way to symbolise my opposition to a man representing violence that is increasingly normative in Western nation-states. My decision was made when I was asked to speak at the Women’s March. Whilst apprehensive (due to criticisms of women’s marches in the US and UK), I felt the platform could be used to disrupt the mainstream narrative about Trump as an aberration. I wanted to critique the British state, the audience itself, and former leaders who we class as distinct from Trump, as instead complicit in the very same violence including Islamophobic border controls, separation of children from parents, police brutality, racism and misogyny. For me, the protest had to be about more than a president over there and instead a precedent, here, too.

I cautiously prepared myself to attend, planning to go alone because I knew from past experience that I would need space to process the feelings of discomfort protests often bring up. Discomfort not just at the reductive narratives I anticipated, but also at the way the space itself would make me feel. In spaces of such self-declared solidarity, there are often strangely objectifying reactions to visibly Muslim women.

Indeed, as one of few visibly Muslim women I found myself having to make a concerted effort to avoid photographs, wary of becoming a token in someone’s Instagram story. Other Muslim women I spoke to attested to constant attention from cameras and journalists looking for the perfect shot.

It is ironic that a protest purporting to include the fight for our humanity left Muslim women feeling so objectified and tokenised. When I tweeted about this a woman replied that at nearly every rally she had ever attended she experienced people lauding her ‘bravery’, asking for photos and treating her like a ‘zoo animal’. I empathise.

Unlike everyday Islamophobia which leads to visibly Muslim women being harassed, this feels more a manifestation of “Islamophilia”: a reverence for Muslims/Islam that can lead to Muslims being strangely venerated. Similar to Orientalism’s simultaneous degradation and fetishisation of Muslim women, the Othering of Muslim women today can be experienced as both harassment and fascination – two sides of the same coin.

This objectification was particularly jarring in a crowd of 250,000 purported allies. Whilst part of me was impressed at the turn out I found myself wondering if the number of people protesting was as important as the depth of their critique and ability to extend it to themselves. In fact, the general feeling of the day was less disruptive and critical, and more party-esque. People could take their #protest photo with a funny placard for Instagram and go home. I watched a video where protestors made comments about being pleased to have ‘been there’, now sitting in the London sun, ‘what more could you ask for?’ one laughed. I personally could have asked for more recognition that protest isn’t just a fun day out. Part of me actually felt alienated by the turn-out – how could so many people be so invested in protesting US state violence but not acknowledge Britain’s own and their complicity in it? Perhaps the answer is in the question: because it does not require self-reflection – you can take a selfie with a Muslim, grab a beer afterwards and feel it is a job done. 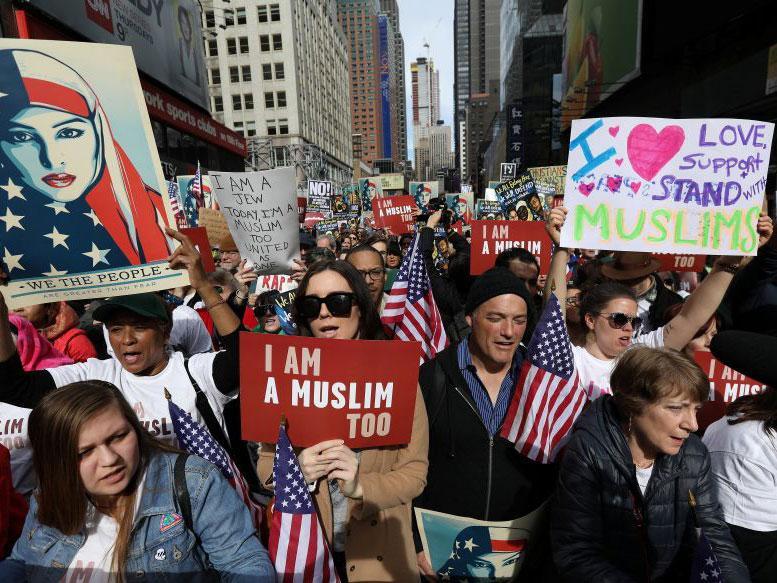 There is something infinitely lonely about standing in a crowd of 250,000 purported allies but not feeling seen beyond what you represent as #OneOfTheOppressed.

It is incomparable to know you remain a symbol, not a human, even in the eyes of those who are ‘on your side’ – perhaps a symbol of resistance or bravery instead of violence and barbarism this time, but either way you remain reduced.

One man consistently checked my facial expressions to gauge his reactions to speakers in Trafalgar Square – pointedly making comments like, ‘I think we should all be equal’, or ‘I hate racism’. His performance reminded me that even amongst supposed allies I am talked over and talked at in order for others to construct themselves as “Good”, deflecting Islamophobia onto the “Bad” Trump. Perhaps a comparison can be made here to how the right deflects their complicity in violence by blaming immigrants/Muslims for it. Is the way the liberal left do it by blaming fascists? Maybe the more damning truth is that we all are and have been complicit in reproducing violence. The longer we fail to see that, the longer our protest remains superficial.

Indeed, whilst some speakers, activists and placards did, of course, raise such critiques and try to hold a mirror up to the crowd, the overwhelming majority subconsciously reproduced the politics they were supposedly against – politics that sustain my oppression as a Muslim woman and therefore left me feeling further alienated. For example, placards telling Trump to keep his hands off the Queen and speakers praising Churchill or exhibiting patriotism reminded me that for many, opposition to Trump does not extend to critique of racialised nationalism, power systems, or colonial nation-state structures which he is a product of. Countless jokes about Trump being ‘the only baby that should be caged’ also reproduced Trump’s own shallow logics by ignoring questions of accountability, justice, and racism, instead preferring a reactionary punitive response.

I couldn’t help but feel that signs proclaiming ‘no tea for Trump’, or explaining ‘a trump refers to noxious gas released from the anus’ represented a more general complacency too: the chiding of a single man, not a system.

The baby blimp epitomised this – reproducing the politics it opposed by demonstrating no desire for accountability and instead conceding to Trump’s logics that emasculation and infantilising are methods to humiliate. I, therefore, question the chant, ‘Together, United, We’ll never be defeated’ – if our unity remains a bandage tied by reproducing the politics of our oppressors, we may well still be defeated.

I’m sure my analysis makes me a perfect target for accusations of ‘snowflakiness’, or ingratitude. But the truth is that such narratives were prevalent and alienating. To realise that majority opposition to Trump doesn’t extend to an opposition of the oppressive institutions and historical conditions he is a product of – and many that I am a victim too – is disappointing to say the least. It represents the way “equality” talk and emphasis on “love trumps hate” with no mention of injustice or liberation creates a politics which continuously reproduces, rather than combats, oppression. This means I can turn up to a march against racism and Islamophobia but still feel objectified, erased and reduced as a Muslim woman.

2 thoughts on “Everyone “Loves” a Muslim on a March, but Who Loves Us on the Train Home?”