I go to hug my little sister at the kitchen table and suddenly we’re both crying. I cradle her in my arms as wordless sobs wrack through her. I know that there are other girls, so many other girls, across this country feeling the way she is right now. I know because I did, and I hurt because even though I did she still seems to have to too.

We are crying because it is unfair. Fundamentally it is unfair. Unfair that girls who are racialised have to mature so much faster than everyone else.

My mother comes over to join in our hugging and my sister says that inside the house is the only place she can really feel… “safe” we all say in unison (we are blessed we have that at least, not everyone does, alhamdulilah). And that is the first time I realise that we are all conscious of the fact that being brown Muslim women in Britain every day is a mentally exhausting.

My sister has just recently turned eighteen and is studying locally. This is her first time out of school and in higher education which is notoriously a jump that from state schools like ours, takes you from the multi-ethnic hub you’ve been normalised into, to being one of a handful of people of colour in predominantly white spaces. For my sister’s first few weeks in this new space she talked about how difficult it seemed to make friends and connections – a common experience. However, today she told me the thing that we all know to be true. She told me how she is beginning to see that her difficulty is unique – she is beginning to see herself through other people’s eyes. It is a journey I remember very well.

I remember the first time I began to understand why conversations that white people had so smoothly with each other never felt quite so easy with me. I made the mental leap to see what they saw when they saw me, and to understand the years of socialisation and inculcation into whiteness that was the lens through which they perceived me. I remember how small I felt to have to look at myself from their vantage point, I remember how it was an act of ridding myself of my humanity, stripping myself down to my symbolic significance. I remember how helpless it made me. I tell my sister. And I tell her the hardest part is that they don’t know. The hardest part is that racism is so embedded in the way they are brought up that these classmates, colleagues, teachers and students, do not even know that they’re necessarily viewing her through a lens of whiteness, and thus, of superiority. They will never acknowledge it. They don’t realise that they’re benefiting from growing up surrounded by the constantly reinforced message that they are valuable, whilst also projecting it over those they’ve been taught are less valuable. They don’t understand as harshly and clearly as we do that in any momentary interaction we have had to journey back and forth in our minds to understand their discomfort and our pain. They don’t know that despite their protestations to be socially conscious, anti-racist, etc, etc, they make us feel so Other, so alienated, and so alone.

I am in no doubt that women of colour are the most emotionally intelligent people in most spaces. We do triple and quadruple the thinking others have to do, for we, too, are socialised into a white worldview, but we are not its beneficiaries.  The damage of the double-think this causes, the self-loathing and attempts to erase ourselves – from hating how we look, to physically altering ourselves, to trying to appear “whiter” in all its coded forms – haunt us. But it is only, finally, I think, when we are surrounded by whiteness in the way that UK higher education allows for, that we see the disjuncture between that worldview and our position in it. We have learnt to see ourselves as both Other and Self. We uniquely see ourselves through multiple gazes at once – as bell hooks said (specifically of African-American women) marginality gives one a special vantage point. No one can see as we do. And therefore I don’t believe anyone can hurt as we hurt, or be as simultaneously capable of empathy, love and rage as we are. Not in this specific way.

I hug my sister because her experiences bring up memories long buried – feelings of utter loneliness, the reminder that this hyperawareness of myself, imposed not by me, but by the context of whiteness in University, could be understood by no one else. That was until I met other women of colour who felt the same. And I distinctly remember one close friend musing, ‘what do white people spend all their time thinking about since they don’t have to think about all of this?’

And that sums it up really. My sister frustratedly cries out, ‘it’s just so much to have to think about on top of everything else’. ‘It’ being constantly navigating the white gaze upon us, the ignorance of our peers, the fragility of their internalised white superiority, the knowledge that whether they intend it or not, they deem us less than – we feel it when we enter rooms, we feel it when the white friend next to us is addressed but never us, we feel it from our teachers, and feel it and feel it until at some point we acknowledge it and end up crying in the kitchen.

When I hug my sister I cry partially because I recognise myself in her, and partially because it breaks my heart that that recognition cannot prevent her having to experience it on her own, and partially because I feel recognised by her. In fact, it is the first time in four or five years that I feel truly understood in the way she understands – despite my brother having been through the University experience now, too. There is something specific about women of colour and how we have to be aware of our race differently than men do. In fact, I have met many men who comment or allude that perhaps I think too much through the lens of race – I know men who three years later say they now understand why I was so angry… and I wonder at this discrepancy. But it makes sense. The double-think that we are forced to do as women of colour leaves us feeling utterly unloved – we know we are the unwanted Other – we have had to figure out why. But men, many times, experience the reverse side of the Other coin – the wanted Other, the Cool Other. Yes, they are still experiencing racism and a racist worldview upon them when this happens, but I think it manifests as fetishisation in many cases. Especially in higher education, men of colour are often constructed as “cool” by whiteness. This is undoubtedly a form of Othering and dehumanisation but one that often means they are somehow (more) socially wanted and socially valuable (obviously dependent on their able-bodied, neurotypical-ness) social assets than women of colour who, on the other hand, are social misfits, too loud, too quiet, too big, too small – social pariahs.

Hugging my sister I wonder how there are conversations happening about mental health that don’t take socio-political phenomenon such as racism and sexism into account. The other day I was talking with a group of black friends. We discussed our different University memories and yet the same relentless experience of being neglected, isolated, alienated, erased, tokenised, patronised and ignored that cumulatively caused exhaustion. I remember thinking that if only those who wonder “why the BME attainment gap is so low?”, or “why BME students drop out of University in disproportionate numbers?” could be present – hearing the experiences of even a handful of students of colour make it impossible to not understand what a daily mental struggle racism is. That alongside the common experience of University and the struggles white students face, racialised students also face the impact of institutionalised racism (and often institutionalised classism and economic exclusion) at every level of the University system. It overwhelms our experiences, but is still entirely denied as real.

I cry when I hug my sister because I wonder how many other girls feel that same sense of loneliness as they reach the middle part of their first term. I flashback to giving a talk on Institutional Racism at the Cambridge Union and meeting a Muslim fresher I know who had started a few days prior. When I asked how she was she said ‘okay’ but I read the opposite in her demeanour. I wanted to hug her and tell her it would be okay, that I knew what she was experiencing and that I was sorry. But instead I told her, ‘this is the hardest part, don’t worry, I hated my first year’, because sometimes it is enough to simply hear that your pain is legitimate, and that the world you are seeing and occupying and living in every day – despite being unacknowledged by all those around you – is real.

In spite of it all, this crying session over the kitchen table makes me even more pleased to be publishing A FLY GIRL’S GUIDE TO UNIVERSITY: Being a woman of colour at Cambridge and other Institutions of Power and Elitism – a book I co-wrote with Lola Olufemi, Waithera Sebatindira and Odelia Younge during our time at University (you can pre-order now, UK P&P is FREE if you do!). It is a testament to our experiences and dependence on each other as well as our efforts to organise. I hope that whilst I am not able to hug every crying brown girl who is beginning to realise the exhaustion that comes with “being” a woman of colour – I can put this book out into the world and hope that she who needs it finds it to be a validating voice, a companion and reminder that if nothing else, we are not alone – there will always be women speaking in unison with us, acknowledging that they, too, know, and thus recognise, our pain. Whilst white women cannot, and men of colour may not, and both may perceive us to be too angry, too hard-line, over-thinking, etc. – we will always have each other – we must make sure we have each other. 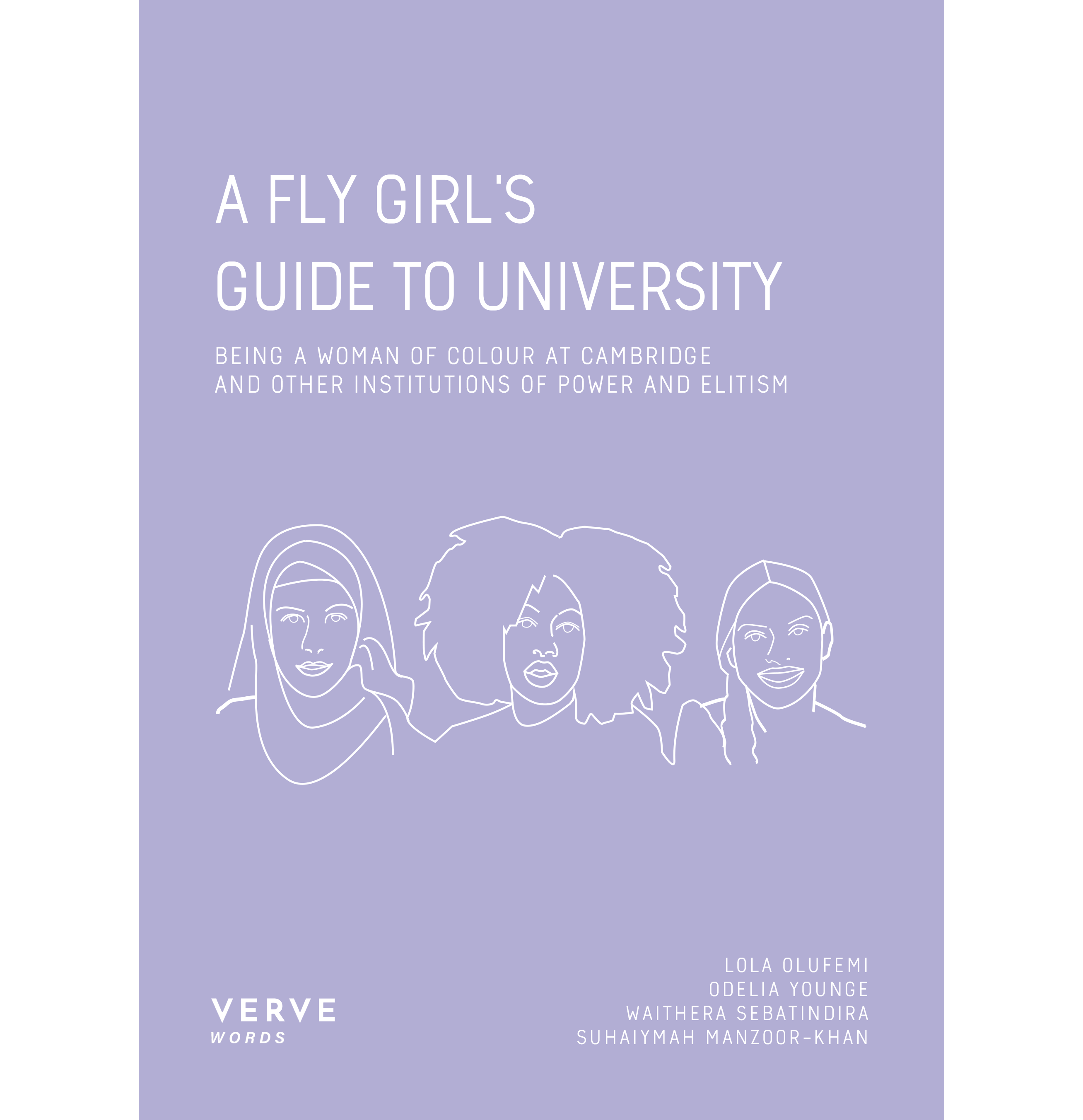